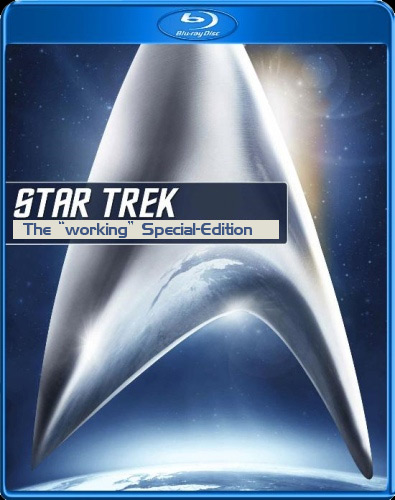 Many (including myself) have wondered what the point was of going to such great lengths to reconcile existing Star Trek cannon with a new story. Why bother with all this alternate-timeline hooey? If you’re rebooting the franchise and starting over, then just start over! The problem with that, according to Kurtzman & Orci, is that audiences might have assumed this new movie was simply an attempt to tell a story about Kirk & Spock from back before the original series, and everything that happened in Trek lore is still destined to happen. Where’s the fun in watching this crew take on the galaxy if we know Kirk will eventually be killed by Soren, Spock will become an ambassador to Romulus and everyone else lives? By history being altered, nothing has yet been written – Kirk really could die on the next mission and Khan might end up selling shoes. With a whole new timeline, stories are no longer beholden to “established” history and while everything we know and love is still there, how it plays out is no longer written. If you’ll pardon the cliche, essentially it means that everything old is new again!

A deleted scene established that Kirk’s stepdad is a real bad mofo, and he forces young Kirk to wax & polish the car. He threatens that if he finds even one spec of dirt, he’s going to beat the kid senseless (I still think it’s a dumb scene, but at least this provides a lot more motivation for it). Other tidbits about this scene: The Beastie Boys song may be a blatant attempt to make Star Trek seem more hip, but if you look closely at the dashboard, the station playing it is listed as ”oldies.” Also, what the hell is a cliff like this doing in famously flat Iowa? Again, close eyes will see that the sign Kirk blows through reads “quarry” (i.e. a man-made pit). Another scene of 10 year old Kirk that didn’t make the final cut (I’m not sure if it was filmed or not) also involved a young Carol Marcus! Props to the boys for diving so deeply into the Trek mythos (they both admit to being Wrath of Khan junkies).

A fan asked why George Kirk’s pregnant wife was on board the USS Kelvin, since families weren’t supposed to be brought on board until the Next Gendays. “Because she’s a Starfleet officer” explained the dynamic duo. This is also alluded to in another line about Kirk’s mother being off-world.

After the incident with the USS Kelvin, did Nero and his crew really just hang around the black hole for 25 years, playing Fizbin and waiting for Spock to emerge? Couldn’t they have used that time to, say, help Romulus avert eventual disaster? Turns out a major cut scene explains what happened during that time frame. After being rammed by the Kelvin, Nero’s ship was crippled; a convoy of Klingon Warbirds captured the crew and held them in a prison camp for all those years. Eventually the Romulans escaped, reclaimed their ship, blew up 47 Klingon vessels and returned to their mission (some of this is discussed in dialog which remains in the film). The good news is that these scenes were completed and there is hope they may surface on the DVD.

The motherlode of the film’s many handy coincidences involves the banished Kirk conveniently running into Spock Prime (as the writers coined him early on) in his cave on Delta Vega. Much to my surprise and delight, even this jaw-dropping moment has an explanation! In the minds of the creators, the focus of the plot is that Nero’s destruction of the timeline has altered history to the point that the all important friendship of Kirk and Spock is now threatened. If these two don’t come together, the fabric of space and time itself is endangered (as we have witnessed by the universe itself being saved countless times over the last 40 years). Kirk “coincidentally” running into Spock Prime is an example of fate itself trying to bring these two together. That’s how important it is. In fact a line about this was included during Spock Prime’s mind-meld speech, but was removed at the last minute (the writers said this particular was labored over more than any other section of the script and they now regret not including the line about fate). While this doesn’t completely forgive a very hackneyed sequence, it does address the most egregious moment in the film and I appreciate that an attempt was made to address it. In the wake of criticism over this scene, perhaps the line will be restored for the DVD release. It would make a world of difference.

NEXT ON JERRY SPRINGER

A lot of people found themselves scratching their heads over the unlikely romantic pairing of Spock and Uhura. The inspiration for this came from the original series, where apparently there are scenes of these two flirting (if anyone reading this remembers which episodes they’re talking about, please fill us in). Since the rough-and-tumble badboy is always the one to get the girl, the writers wanted to pair Uhura up with the less obvious choice. Besides, since Uhura is a smart, mature woman, they felt that she would probably gravitate towards the more interesting, intellectually mature man.

There was a lot more material further explaining Kirk’s relationship with the hot green chick. Since she worked in the computer lab, Kirk was essentially sleeping with her to gain access to the simulation computer so he could cheat on the Kobyashi Maru. In a cut scene, Kirk tells her that if she gets an email from him while he’s taking the test, she should open it; she does, and it launches a virus which installs his cheat-patch.

Why didn’t the universe explode when Spock Prime met New Spock? What about all the time-honored SF theories that going back in time and meeting yourself will lead to anti matter explosions, tears in the fabric of space/time and dogs and cats living together? In doing their research on the latest fringe science theories, the current thinking is that events which create huge paradoxes (like going back in time and killing your grandfather) no longer will result in cataclysm, but the instant creation of an alternate universe which allows for the new reality (and I’ll back them up on this, since I’ve read material on the subject that basically says the same thing).

Why did Kirk feel the need to fire all weapons at a doomed ship? After all, Nero’s vessel was mere seconds away from being crushed inside the black hole. Not true, said the Trek scribes – Nero’s ship was built to travel through black holes, so if Kirk hadn’t done anything, the bad guys would have slipped away and emerged god knows where (and when) ready to do more evil.

Why on Earth did JJ Abrams turn Star Trek into a two-hour commercial for lens flare plugins? I have to admit, upon my second viewing of the film I found this visual motif to be highly distracting and irritating. Flares, reflections and luminous ghosts simply appear everywhere, even without any obvious sources. The reason? JJ wanted a visual metaphor that stated “we have a bright future ahead of us.” No, I’m not making this up.

Would creating a big explosion on the event horizon of a black hole really create a shockwave that the Enterprise could surf to safety? No. But the explosion would alter the nature of the event horizon and create a space-time ripple that would… do something. Ok, my memory of this answer is a little shaky, but the pair did impress the crowd with a well researched solution that did make sense – you’ll have to listen to the podcast for the details.
Overall, I have to offer props to Kurtzman & Orci for having good answers to just about every moment in the film that elicited a “WTF?” Had some of these cut scenes and dialog been retained, the truck-sized holes in plot and logic might have just been big enough to squeeze a Smart car through. I’m impressed that so much thought did go into moments that most people wouldn’t think twice about – but, then again, give me a million dollars and a year to write a Star Trek movie and I guarantee you I’ll do a whole lot a thinkin’!